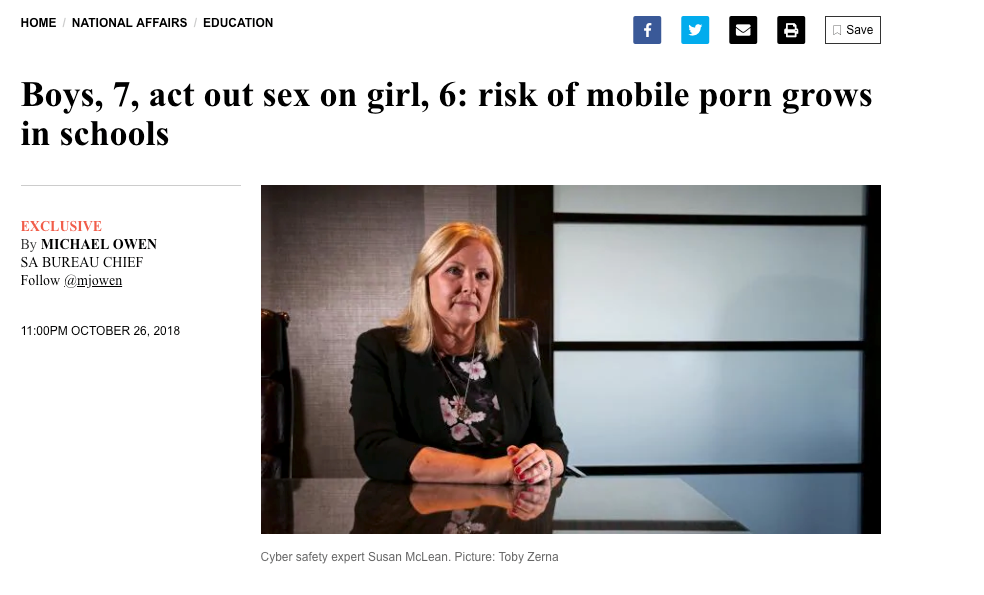 Child-on-child sexual assaults are on the rise “across all education sectors and demographics” in what experts are saying are copycat attacks - as kids re-enact the pornography they’ve viewed online.

The Weekend Australian reported one recent case in which two seven-year-old boys allegedly sexually assaulted a six-year-old girl in the playground of a South Australian Lutheran school after viewing explicit adult content on a mobile device in a classroom.

SA Police claimed they were unable to manage or investigate the matter because the alleged perpetrators were under age 10. They also said the complaint had not been reported in time by the school, according to The Weekend Australian.

“It was totally swept under the carpet by the school,” Linewize cyber expert Susan McLean confirmed. McLean spoke to the girl’s mother earlier this month, and confirmed that the victim has since left the school while the two boys remain.

“This was high-level stuff,” McLean said, referring to the severity of the assault. “I understand you cannot charge a person under 10 but if you’ve got two seven-year-old boys sexually ­assaulting a six-year-old girl there needs to be an intervention of some description."

“There were students who had allegedly viewed on an electronic device some material which is understood to be of some explicit sexual nature. The students then moved from a space where they had viewed that to the playground and then what they had viewed brought about actions by the students which obviously had been influenced by what they had seen. We know the behaviour is not consistent with what we would call normal playground behaviour.”

The police have only now become involved, Proeve told The Weekend Australian. “The police have now asked some questions and it is an ongoing investigation — we have been following up on the matter.” He added that “the leadership of the school worked with all of the children involved.”

The average age an Australian child is first exposed to online pornography is now eight, according to McLean. Other sources say 11, but McLean maintains her field experience as a nationally recognised cyber educator tells her otherwise.

There is broad international consensus that pornography is becoming an increasingly accepted and prevalent aspect of young people’s sexuality experiences. This can create unhealthy views about sex and relationships, and is leading young people to engage in physically and emotionally risky behaviours. The Australian Psychological Society (APS) has highlighted many of these concerns.

"Despite their ability to effectively use online technologies,” the APS report notes, “children and young people still need protection from content that exploits their immaturity and could harm their development. Viewing highly sexualised or violent pornographic material has many risks for children’s psychological development and mental health, by potentially skewing their views of normality and acceptable behaviour at a crucial time of development."

The APS recommends a range of cyber safety strategies that aim to give children, parents and teachers safe and responsible ways of using and accessing online environments, ensuring online risks are managed and online experiences are safe and positive.

But education around digital wellbeing and citizenship is also an essential component of online safety.

Specifically, the APS has recommended that parents and schools provide young people with the knowledge to critique pornography and understand that the imagery has been constructed for a commercial purpose.

It has also recommended that adequate sex education include consideration of how pornography impacts sexual behaviours and decisions, how to make safe choices, and what makes for healthy relationships.

Tim Levy, Managing Director of Linewize by Family Zone shares the story of how our dedication to protecting children online made the ...